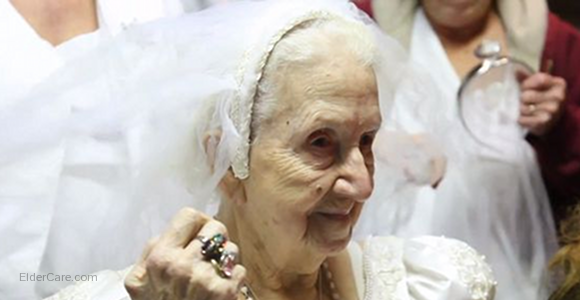 Love at Any Age? Grandmother Married at 85…

Love, affection, companionship, friendship—call it what you will, but it is something that makes life full and special at any age.

But getting married later in life can bring confused or surprised looks along with the congratulations. Because couples who live together outside marriage no longer face the societal judgement they once did, families and friends are often surprised when older couples still choose to marry.

But the newlyweds have no illusions about the vow “in sickness and in health”. Their joy comes from consciously committing to share the best and the worst of what comes ahead.

Dana Jackson married her first husband at age 15. In February 2012 – just before Valentine’s Day – she married again, at the age of 100. The groom was Bill Stauss, 87, a fellow resident at the Rosewood Health Care Center in Bowling Green, Kentucky. The 100-year-old bride wore a traditional white gown. Although she had been married three times before, it was the first time she had a formal wedding.

“Well, we was just country people,” Jackson said of why she hadn’t had a gown or wedding before. “You didn’t do the things you do now. It was simple clothes and maybe a bouquet cut out of the yard. And that’s just the way it was.”

Stauss thought he’d never get married again. But he knew he had the right woman in Jackson.

“I found one that’s just as nice as can be,” he said. “Treats me good. It’s rare to find a girl like that.”

There are many heartwarming stories like the one of Dana and Bill. My BF’s grandmother remarried at 85, much to the chagrin of many in their family. Many roadblocks were raised; old age pensions, their wills and their longevity. But they insisted and enjoyed 5 wonderful years together, dying within months of each other.

Was it the right choice-- you bet!!

Would I recommend it for other seniors? I would say this. Be compassionate, listen and support your senior relatives as they enjoy the wonderful opportunity to fall in love again.

What is the Best In-Home Care Fit For You?
Stay Healthy With These Proactive Aging Tips
What to consider before selecting an elder care provider?
Starting A Mentorship Program In Your Facility
5 Ways to Stay Healthy After a Mesothelioma Diagnosis
How to Make Your Home Fall Proof With 8 Simple Tips
Top Life Enhancing Tech Gadgets for Seniors
Adult Day Care Centers? 4 Good Reasons You Should Consider One
4 Simple Travel Tips Every Senior Should Know
Why Seniors Should be Active & 32 Fun Activities for the Mind & Body

Top elder care providers near you